(Directly to you from a lightly edited FIRESTONE WALKER Press Release)

Venice, CA: Beer is finally flowing through Firestone Walker Brewing Company’s Propagator brewhouse in Venice, California, and a familiar face is at the helm as brewer Ben Maushardt takes the reins of Firestone Walker’s R&D program.

The Propagator will operate as a pilot brewhouse for experimental beers, setting the pace for what is next from Firestone Walker. It will also serve as a working neighborhood brewery to produce unique one-off beers available solely at the Venice location.

The switch was flipped on the Propagator last week, and the first true batch is being brewed this week.

David Walker pointed out that, “The Propagator is the next step in our brewery evolution. It will be our idea laboratory, and hopefully an integral contributor to the local brewing community.” 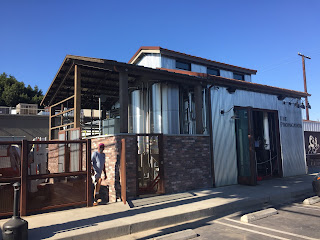 The Propagator falls into capable hands with Maushardt, who has been with Firestone Walker for more than two years, and who is now making the move from Paso Robles to Venice.
“We chose Ben because it’s important that we have one of our best-trained and talented team members take on this role,” said Brewmaster Matt Brynildson.

He added, “When Ben is not testing new recipes or running hop, malt and yeast trials for the Paso Robles brewery, he will be producing small batches of wort for our Barrelworks team and making killer Venice-only beers for local patrons.”