This is the last of three posts on a recent visit to three new breweries in Ventura that the former Ventura Craft Beer Examiner visited and sampled. 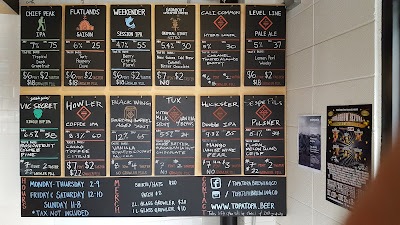 Located at 104 Thompson Blvd in Ventura and founded just over a year ago in June 2015, Topa Topa is the brewery closest to Anacapa, the only legitimate craft brewery the VCBE discovered during his heyday, back in 2010. Which is not the same as saying it was the only brewery in existence in Ventura at the time, nor that Anacapa is legitimate today.

Topa Topa shares a parking lot with the Ventura Surf Shop, which does NOT appreciate brewpub patrons parking in their spaces. On the recent June evening that the So Cal Craft Beer Bloggers visited, there was a man giving us the evil eye when we dared to park in a surf shop space. We briefly thought about the Second Amendment, lax gun laws, and how cheaply the National Rifle Association was able to buy the United States Congress. (FYI, the NRA has not apparently contributed to Ventura's Congresswoman Julia Brownley).

So, we backed out of the surf shop space and, fortuitously, squeezed into a space between a Maserati and a Tesla parked at rakish angles in front of the functional hipster Topa Topa brewpub.

Reeling from our brush with possible gun violence, we quickly downed a pint each of Chief Peak IPA and Vic Secret Single Hop IPA. Here's how the eminently worthy Chief Peak is fancifully described on Topa Topa's website:

From shrubland to woodland to highland, you’ve creekcrossed and switchbacked through it all today. You pause on the trail for a moment and crack open a Chief Peak. The piney hops are first to arrive. The tropical tones of passion fruit, orange, and gooseberry aren’t far behind. Watch as the sky blends from orange to blue. Look out on the valley and trace the contours of the mountain. Breathe in the thinning air, wipe the sweat from your brow, and take another well-earned sip.

One of the beer sommeliers in residence was kind enough to share her fact sheet on Chief Peak. Clocking in at 7% ABV (alcohol by volume) and 75% IBU (international bitterness units), with an SRM (standard reference method) color of 5 (basically golden, like the California sunset), the fact sheet informed us that Chief Peak was a "dank West Coast style IPA with big grapefruit and tropical fruit notes."

The beer sommelier did not have info on the single-hop brew, Vic Secret (maybe because it was a secret?), but it was also a highly worthy beer. A brewer friend in NorCal informed us that Vic Secret is "a lately hip and beloved hop from ... somewhere with a lot of sheep." In fact, according to Hopslist, Vic Secret is from Victoria, Australia and had its first commercial harvest in 2013.

In the So Cal Craft Beer Bloggers' opinion, Topa Topa seemed to be the brewery to watch—we felt their ambitions were long range and veered toward the kind of greatness we'd found in Russian River, Drake's, and Deschutes, to name just a few favorite West Coast breweries. Topa Topa's head brewer, Casey Harris, worked at Stone in San Diego previous to this gig—as senior brewer, no less.

A Word on the Name. The SCCB Bloggers have done a lot of research on the original inhabitants of the Central Coast, and so were drawn particularly to this brewery's name. It comes from the indigenous name for a local mountain range that contains a California condor sanctuary. Sespe Creek, which flows out of the Topatopa Mountains, is one of the last wild rivers in Southern California.
Posted by C. C. Hansen at 12:35 PM