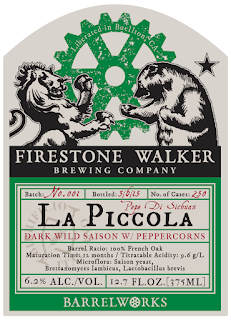 Today I got this press release from Christoper Weir at Firestone Walker Brewing in Paso Robles. I'll reproduce most of the press release below. But first I thought I'd list three things about this release that convinced me that the way La Piccola was made represents everything I like about craft beer. And I haven't even tasted the beer yet!

Okay, here are the highlights from Firestone Walker's press release: