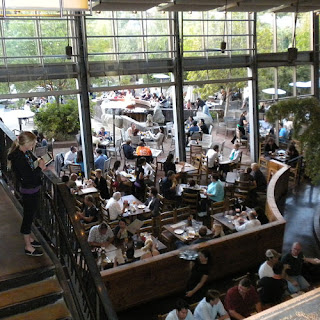 Stone's logo is a devilish looking gargoyle, which "has the power to ward off evil spirits," such as "chemical preservatives, additives & adjuncts" (Stone Website). This causes one to ponder -- is that why the Belgian monks who perfected the craft of brewing ale over the centuries named their creations things like "Duvel" (devil in the Brabantian, Ghent, and Antwerp dialect of its Flemish founders) and "Lucifer" (see VCBE article, "Backyard...")? Be that as it may, Stone brews are expertly crafted, premier examples of their types. A recent visit to the World Bistro & Gardens revealed a draft beer menu that included two of the brewery's signature beers, Arrogant Bastard Ale and Stone Smoked Porter, "On Cask with American Oak." The subtlety and complexity of these already world-class brews was enhanced by the flavors from the oak cask. "Cask Style" refers to beer that is unfiltered and unpasteurised, and conditioned (including secondary fermentation) and served from a cask without additional nitrogen or carbon dioxide pressure (see VCBE article, "Craft Beer Syzygy..." for discussion of oak cask ale). 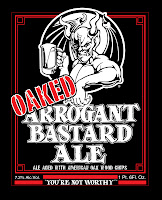 Like human beings and most other mammals, Stone was not born fully-grown. The brewery was founded in 1996 by Steve Wagner (President and Brewmaster) and Greg Koch (CEO), a couple of L.A. guys who liked beer and kept running in to each other. Until just a few years ago, the brewery was located in the same facility now occupied by Lost Abbey/Port Brewing in San Marcos (see "Lost Abbey...").  From a humble 400 barrels of ale produced in 1996, the brewery's output in 2009 was an arrogant 98,500 barrels or over three million gallons of beer, making it the #15 craft brewcompany in the U.S.in 2009 (source: Brewer's Association). Any trip to San Diego should include a visit to the Stone Brewing World Bistro & Gardens - whether you like beer or not! There's an extensive wine list and the unique indoor/outdoor setting is sublime. 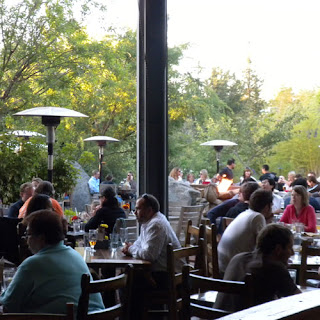