Tasted a few new beers last night. A couple were so good that I had to tell somebody about them. So I'll interrupt my intermittent re-postings from "My Year as a Beer Blogger for Examiner.com" to note the quality, taste, and enjoyment I got from trying each of these new (to me) beers. 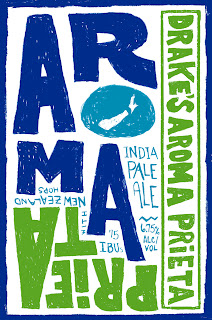 Drake's is up the Bay Area, in San Leandro, across the Bay from San Francisco and nestled between Hayward and Oakland. I remember many years ago the region had an earthquake, which came to be known as the Loma Prieta Earthquake, after a peak in the Santa Cruz Mountains to the south near the quake's epicenter.

The Drake's website says that the twin sisters, their popular Aroma Coma and Aroma Prieta, will be released on July 28, 2013. Verdugo Bar, where I sipped the Prieta last night, apparently jumped the release date by at least a day. Here's how Drake's describes the Prieta:

“Shake out from Aroma Coma with Aroma Prieta. Aroma Coma’s sister beer mirrors its twin starting with primarily American 2-row barley malt and a touch Caramalt for body. From there, we turn things upside down. This time, Prieta leaves behind Coma’s North American hops for some Southern Hemisphere hop action. New Zealand hops Nelson Sauvin, Pacific Jade, and Motueka and Aussie hop Helga in the double dry-hop give Aroma Prieta huge notes of tropical fruit, gooseberries, and grapefruit. Like Coma but different: breathe in these hops and enjoy.”

We definitely got the beautiful floral aroma; not much grapefruit or tropical fruit, and we don't know what gooseberries taste like, but we also picked up a kind of nutty-oily flavor at the back of the palate - almost like toasted sesame. Distinctive, and not in a bad way. 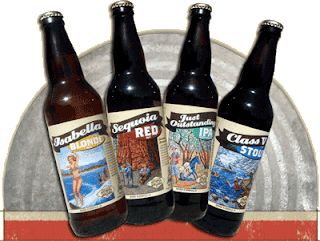 Elsewhere on these pages (Beer Advocate's Top 100 West Coast Beers), I mention that I was not aware of Kern River Brewing. Well, I got my chance last night to sample one of their brews for the first time, the confidently named "Just Outstanding IPA." It was good, a bit more floral than the Prieta, and perhaps with a hint of grapefruit. The Alstrom brothers, who founded Beer Advocate, describe the beer this way, and I concur:

Finally, we ended our happy beer adventure with a new (for us) offering from one of our favorite breweries, The Bruery in Placentia, CA: Ebony and Oak, a stout aged in bourbon barrels. The craft beer grapevine tells me that The Bruery crowd-sourced the graphic design for the label through Designcrowd.com, and the winner was graphic designer Eric Sena, who describes himself as a homebrewer, cyclist, and good listener, as well as graphic designer on his Twitter bio. 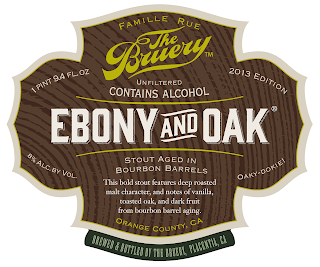