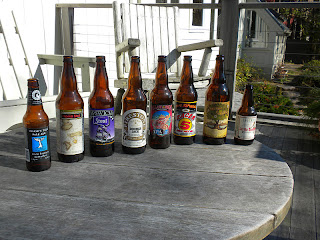 Not long ago, So Cal Craft Beer traveled to the New England Seashore, with stops in Connecticut, Cape Cod, New Hampshire, and Maine.

The mission was not without its flaws: almost all of our California offerings had to be made in the form of bottled beer, which favors breweries of a certain size and scale to pull off. We couldn't share esoteric casks or firkins from Ladyface, but we were VERY happy to be able to share some of our favorites from Firestone-Walker, Bear Republic, Ballast Point, Sierra Nevada, and Lagunitas (see photo, above).

I'd like to make a special mention of Philadelphia-based distributor Origlio Beverage, who makes these beers and others, like Russian River and Great Divide, available all over the Eastern Seaboard.

New England Standouts
Ipswitch and Clown Shoes (links to a great interview with the Head Brewer, Dan Lipke) appear to be separate brands under the umbrella of Mercury Brewing in Ipswitch, Massachusetts. A current favorite from Clown Shoes is Muffin Top, a 10% ABV Belgian-style Tripel IPA hybrid -- just the right balance of fizz, hops, and rich flavor.

Cisco from Nantucket has room for improvement, Smuttynose from New Hampshire can do no wrong, and Magic Hat from Vermont is a contender. We were introduced to Shipyard from Maine at a beer tasting on the West Coast back in 2010 -- they've got pretty good distribution througout the country. Their Pugsley's XXXX IPA is over the top (and we're fans of BIG IPAs, like Ballast Point's Sculpin), but their milder beers, such as Old Thumper, are eminently worthy -- and because Maine and blueberries are as synonymous as Maine and lobster, it's good to see they've got a Pugsley's Smashed Blueberry, which is on the Porter/Scotch Ale end of the spectrum -- delicious as a dessert beer on a cool night.

Thanks to Tim and Brucie Wright (New Hampshire), Peter Wright, Lee Stivers, and Missy Engelhard (Maine), Don and Julie Macnary (Cape Cod), and Tom and Madora Koehne and Andrew and Macgregor Onderdonk (Connecticut) for hosting and participating in numerous tastings, which were all a lot of fun.
Posted by C. C. Hansen at 12:51 PM