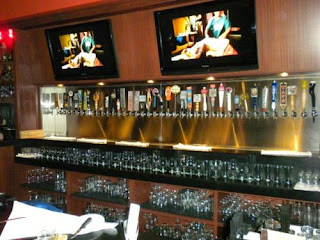 It's going to be a cold one this weekend, so what better establishment to review than 38 Degrees Alehouse and Grill on Main Street in Alhambra.

While Alhambra may not be the hippest part of L.A., 38 Degrees is one of the best places around to sample craft beer and enjoy some reasonably-priced and delicious food while you're at it.

Owner Clay Harding stopped by our table, asked how things were going and told us a little about his place and some exciting plans in the works.

When we called Clay a few days later to confirm a few facts that we learned, he was busy switching out some of the taps and would get back to us. Far be it from So Cal Craft Beer (SCCB) to get between a man and his taps. So, the following facts are not confirmed, but SCCB has it on good authority that they are, in fact, fairly accurate. Corrections welcome!

Our source, who has known Clay since they were in Little League together, says that Clay's father was one of the owners of the late, lamented Crown City Brewery in Pasadena. Which means that he comes from craft beer pioneer royalty, as far as SCCB is concerned. Those of you who have been following SCCB's Ventura Craft Beer Examiner column, know that another Crown City alumnus, Troy Boyle, opened his own place in Pasadena in October 2009.

What makes 38 Degrees stand out is a) a large number of taps - at least 38 by our count; and b) the emphasis on American and especially California craft beers. SCCB and his party enjoyed Craftsman Fireworks, a saison ale aged in oak; Eagle Rock Unity, an Imperial California Common Ale; Stone Double Dry Hopped Lukcy Basartd [sic] American Strong Ale; and a new brewery for us, Coronado's Hoppy Days Belgian IPA.

It goes without saying that I will not be drinking the products of major corporate Super Bowl beer sponsors this coming weekend. Why? No matter how funny and cool their commercials - and I'll be marveling and laughing just like everyone else - they just don't taste good.
So what WILL I be drinking?
I did a lot of research this past weekend.
On Friday I had a bottle of Scrimshaw pilsner from North Coast Brewing Company. This is my current favorite pilsner. For people who might be interested in drinking non-corporate beer, but hesitate to stray too far into unfamiliar territory, this might be just the right choice. Bud, Miller, and Coors are lagers related to the pilsner styles developed in the Western Bohemian city of Plzen (in the Czech Republic) - in fact, the original "budweis" style comes from a Southern Bohemian city called Ceske Budejovice.
But, whereas the American version leaves a strong aftertaste of pencil shavings, Scrimshaw's taste leaves a lingering impression of golden fields of grain waving in a fresh breeze. My thanks to Jeff Musial of Wine Warehouse for bringing this worthy beer to our attention. You can find it now at Trader Joe's and Whole Foods.
On Saturday I tasted Revolution XPA (extra pale ale) from Eagle Rock Brewery, Belgica IPA* from Great Divide Brewing, and Dunkel from TAPS Brewery in Brea, all at the Oinkster in Eagle Rock. Later, I and my posse ran across the street, dodging traffic, into the Coffee Table Bistro's Eagle Rock Lounge, where I went back to North Coast and enjoyed a pint of Old Rasputin* Imperial Stout: rich and complex with notes of coffee and chocolate, the perfect dessert beer. For Super Bowl watchers who aren't afraid to experiment, I'd have to go with the Belgica IPA. It somehow managed to be both yeast-forward, in the style of great Belgian beer, and hop-forward, in the style of great American craft beer.
On Sunday I visited Island Brewery in Carpinteria and drank Paradise Pale and Black Mamba*, their black IPA. Look for a separate report on this visit.

If I had to recommend just TWO beers for your Super Bowl enjoyment, I'd go with Scrimshaw and Paradise Pale.
*Memorable
Posted by C. C. Hansen at 8:21 AM No comments: